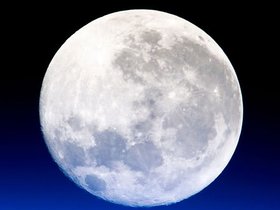 The heavens declare the glory of God;
And the firmament shows His handiwork. (Psalm 19.1; NKJV)

Since the creation of the world His invisible attributes are clearly seen, being understood by the things that are made, even His eternal power and Godhead. (Romans 1.20; NKJV)

Scripture teaches that creation constantly bears witness to its Creator. We know that unbelievers suppress this knowledge in an effort to resist God’s claims upon them (Romans 1.18). However, are we believers not often guilty of taking for granted the wonders of creation and failing to appreciate the revelation of God all around us?

I know this is the case for me. That is why I found it remarkable to be caught up short this past weekend beholding the rising moon. I wrote the poem below, which I share as my own testimony and as an encouragement for all of us to be more attentive to the witness of creation.

On Our Evening Walk
Rounding the corner, she stopped
and dropped my hand to point
and to declare:
“Look! The moon!”

I saw it rising between the rooftops –
full, glowing, seemingly-swollen
to three times its normal size.
We gazed in wonder,
caught up in this unexpected glimpse of glory.

Walking on, we called first to a neighbor
and then to our children,
“Look! The moon!”
And, together, we marveled.